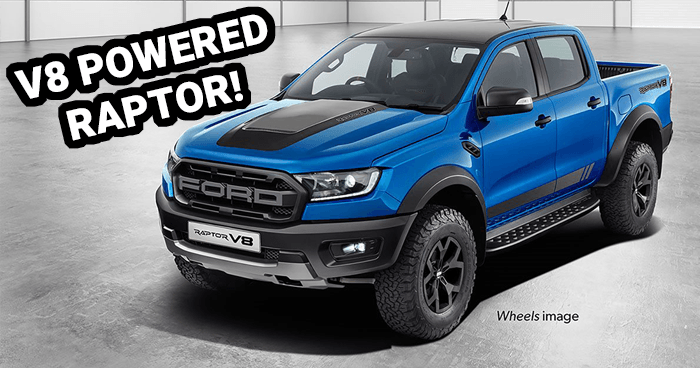 What’s the one thing that Australia lacks when it comes to standard sized dual cab utes?

It’s being reported that this is about to change however, with Ford set to introduce a V8 version of the popular Ranger Raptor.

According to Wheels magazine, Ford Australia has used local engineering talent to create this Aussie-only version of the Raptor.

It will use the 5.0 litre V8 engine from the Ford Mustang, which in the Mustang punches out 339kW and 556Nm.

That compares to the standard Raptor which produces 157kW and 500Nm from its 2.0 twin-turbo four-cylinder diesel.

So more than double the power output.  Nice!  Double the engine note quality too.

Depending on how these are priced the demand should be huge.  Aussies loved the V8 Ford Falcon and Holden Commodore utes, and since then we’ve been stuck with mainly four-cylinder diesel utes.

It probably won’t be cheap though…  The standard Raptor is already $74,990 plus on-road costs.

Wheels says Ford will be using a local engineering firm to install the V8 engines, rather than it being a factory conversion.  Despite this, they’ll still be sold via dealers and come with the full factory warranty.

That sort of money will get you a V8 powered Dodge Ram.  To be fair that is a totally different type of ute (or truck!) but it does give you a lot more space.

There seems to be no shortage of Raptors appearing on the streets however, which shows Aussies are certainly not afraid to drop $75k+ on a ute. What’s an extra $15k or so for that mighty V8 sound and power?

Whilst on the subject of expensive utes, we’re reminded of an article we ran a few years ago on the VelociRaptor.

At $400k it sure makes the V8 Ranger Raptor seem cheap, but it’s based on an American F150 Raptor and packs a massive 450kW of power driving six wheels!

What would you take? A VelociRaptor, or a V8 Ranger plus a small investment unit?!

This year the Superutes racing series is switching to V8 power, after running turbo-diesel four-cylinder engines since 2018.

Having a V8 Ranger Raptor available in Ford showrooms whilst the V8 Ranger Superute is racing on track is a cool possibility.

Check out Wheels Magazine for the full article.